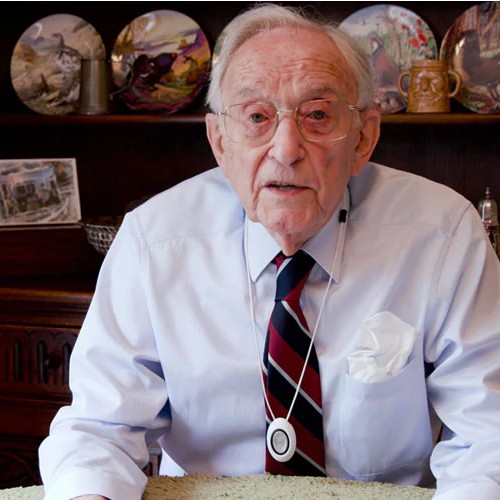 The partnership will see a portion of personal alarm sales made via the RAF Benevolent Fund page donated to the Charity, in order to provide more veterans with the freedom and security to remain in the homes they love.

Many of our customers are armed forces veterans whose lives have been enhanced with the reassurance a personal alarm has given them.

We wanted to give back to the men and women who served our country and to ensure veterans and their families had the peace of mind and the quality of life they deserved.

One such customer is 99-year-old retired Squadron Leader A. Garretts MBE, who had an impressive and varied 30-year career in the RAF.

Mr Garretts first got a Taking Care personal alarm when his wife became unwell some years ago. The alarm gave him and his family peace of mind that help was always available when needed and allowed Mr Garretts to pop to the shops without the fear of leaving his wife alone.

When Mr Garretts’ wife sadly passed away, he took over wearing the personal alarm in order to stop his children worrying about him living alone.

Mr Garretts is still very active and so his alarm gives him great reassurance that he can get help when he needs it, leaving him to continue doing the things he loves such as marquetry, gardening and socialising at the local senior citizen’s club.

“My wife was rather ill during the last years of her life and when I went out she wore the alarm because I didn’t want to leave her alone without some sort of connection. My wife died five years ago and I’ve been wearing it ever since.”

I think it’s a good idea because if I fell over here and the alarm went, the lady next door is a retired nurse and she’s the first to be contacted.

About the RAF Benevolent Fund

We are proud to be partnering with the RAF Benevolent Fund and supporting their veterans. We are delighted to be contributing financially to the work of this charity to the benefit of our customers and their families.

“We are committed to working with our partners to spread the word about the valuable benefits of assistive technology and the part it plays in our vision to help people continue to live an active and independent life.”

The Royal Air Force Benevolent Fund is the RAF’s leading welfare charity. The charity exists to support current and former members of the RAF, their partners and dependants, whenever they need support. In 2020, the Fund spent £26M supporting more than 63,700 members of the RAF Family.

You can find out more about the RAF Benevolent Fund at rafbf.org.